Why do we have such a hard time with international character sets? As more of us start to understand how they work, the implications of support for UTF-8 (and other encodings) are becoming more apparent. Some or all of the following may be wrong; I'm sure you'll correct it silently by editing the text, and adding your name to the contributors, rather than adding discussion.

All the protocols used on the web support the specification of the character encoding used in the content being transferred. For text-based media types like HTML, HTTP defaults to an encoding of ISO-8859-1 (RFC:2616, section 3.7.1). A different encoding needs to be explicitly specified in the HTTP Content-Type header. Other protocols (e.g. MIME) have equivalent headers. Note that the encoding cannot be reliably specified within the content, because applications (like web browsers) need to know the encoding in advance to understand the content. Most browsers accept a meta element in HTML to specify a nonstandard encoding, but this only works if the encoding is identical to ASCII (and hence ISO-8859-1) for the characters <, m, e, t, a, and so on. Computer languages may have their own defaults for encoding. For example, XML, and by inference XHTML, defines UTF-8 as the default encoding. In any case, relying on defaults is not very useful, which is why Foswiki specifies the character set in the HTTP Content-Type header. This helps ensure that the browser makes the right decision rather than guessing.

URLs are generally submitted in an HTTP request (GET, POST, etc) in one of two formats, both of them URL-encoded. The URL format used is completely dependent on the browser, and is independent of the web server or the web page's character encoding: In current (<= 1.1.4) versions of Foswiki, all incoming URLs are mapped back to the site charset. Foswiki must dynamically detect the character encoding of the URL. While detecting charset encodings is a hard problem in general, it's not too hard to discriminate between UTF-8 and 'other', as UTF-8 has a distinctive format. Hence this code uses a simple URL that detects a valid encoding, ensuring security by rejecting 'overlong' UTF-8 encodings.

Internally, most browsers represent the characters being displayed using unicode. When a user types into an input field, those characters are captured as unicode characters. All JavaScript operations on characters assume unicode. When displaying the web page, the browser will either: When an HTML form is submitted, then the data for that form is generally submitted using the encoding specified for the web page. However, there are no standards in this area (see InternationalisationUTF8 for links), so the browser could (in theory) do whatever it wants. However the browser can usually be relied on to converts its internal Unicode characters to the web page's encoding before sending them as POST or GET data to the web server. For example, let's say the server generates a web page containing a form, and sets the encoding in that page to iso-8859-15. A € symbol is represented in iso-8859-15 by code point 0x80. When the page is loaded, the browser maps this to the unicode code point 0x20AC, which is the correct unicode codepoint for a euro character. If the user then_ types_ a euro character in an input field, it is the unicode codepoint that is captured by the browser. However when the form is submitted, the browser silently converts that codepoint back to 0x80 before sending the data to the server, because that was the encoding on the web page. Thus a server using forms can assume that if it imposes a character encoding on a web page, then form data returned to it will also use that encoding. Since the Foswiki raw editor defines the encoding in the page and uses a textarea in a form, this means that the site character set appears to be used throughout.

Unfortunately nothing is ever that simple. If you use XHR from Javascript to send the same form data, then it will always send it UTF-8 encoded, irrespective of the encoding specified for the web page. Thus our euro symbol gets sent as 0x20AC. It is left to the server to know that this 0x20AC should be mapped back to 0x80. Fortunately there are only a few characters that need to be mapped this way. The table at http://www.alanwood.net/demos/ansi.html show the mapping from unicode to Windows 1252, which is one Microsoft ANSI character set (though it varies from the ISO-8859-* standards). This character set considerably overlaps code points with iso-8859-1 but is not identical. Any server that uses iso-8859-1 has to know that these characters (128..159) will appear as unicode code points in data submitted via XHR, and convert them back to the equivalent iso-8859-1 code points if necessary.

Since UTF-8 provides another way to get data into the server, it provides the potential for new security holes. It's possible to use 'overlong' encodings that are actually illegal but sometimes interpreted like a shorter encoding.

Starting from Perl 5.6.0, Perl was able to handle unicode characters, but the unicode support has changed (improved) significantly with almostevery version of Perl since. Perl will silently do some magic, but there are limitations. So, it is the job of the "environment" to know how data are encoded. Tough luck if all you have is a bunch of files on a disk: All you can do is either make assumptions or intelligent guesses (using utf8::is_utf8, for example). Perl has extensive (scary) documentation about its unicode support in its perluniintro and perlunicode man pages. For future guidance to Foswiki development, two documents coming with 5.10 (but valid in current versions of Perl) are helpful: A tutorial perlunitut and a FAQ perlunifaq. Perl also has a number of modules that can help with character set conversions.

Another important concept to get under your belt is the locale. http://en.wikipedia.org/wiki/Locale provides a good definition of a locale, but what does this mean to Foswiki? Foswiki makes heavy use of regular expressions for analysing the text in your topics. Among the things that Foswiki uses regular expressions for are: You can tell Foswiki to {UseLocale}, which will cause it to access the locale definitions on the server when it has to perform any of these operations (={Site}{LocaleRegexes} = provides finer-grained control over the use of locale regexes). A second effect of {UseLocale} is that it overrides the LC_CTYPE and LC_COLLATE settings defined on the server with to Foswiki {Site}{Locale} setting. This in turn affects programs such as grep and rcs which are called by Foswiki.

Foswiki assumes that: These assumptions are inherent in the fact that Foswiki uses global settings (in configure) to determine the encoding to use. Note that Foswiki is known to be broken for XmlHttpRequests due to point 5; Foswiki tries to decode the UTF8-encoded requests sent by XHR using the site character set. Foswiki provides the encoding, as given from the configure setting, to the browsers in both a Content-Type header and a meta element. However it does not use unicode internally. Foswiki instead relies on the existence of predefined character classes that match the byte sequences representing "interesting" characters. Thus the use of Perl functions such as lc, uc and sort are fraught with risk; it is up to the code to ensure that the correct collating sequence is used.

Coders note: while setting the Foswiki site character set will tell Foswiki to interpret byte data (filenames and content) as a specific character set, it will not tell the functions that Perl defines for manipulating character strings. So, for example, uc() and lc() will operate on data as if it were encoded in iso-8859-1. So long as you are only working with ASCII characters this should be no problem, but don't expect any character-set-sensitive functions to work outside the ASCII range unless you force Perl to use a different character set e.g. by setting LC_CTYPE. See the perl unicode documentation for more detail.

Locales should be largely irrelevant to Foswiki's use of encodings. However, you still need to consider them because locales are used to specify national collation orders which vary depending on locale. Note that locales were found to create very interesting bugs when combined with utf8 mode in older versions of Perl, hence Richard decided to abandon trying to combine locales with Perl in earlier work on unicode support.

WORK IN PROGRESS - WHY DO WE STILL DISCOURAGE UTF-8 ? This is the critical setting for deciding what encoding Foswiki is going to use. You are strongly discouraged from setting this to utf-8 when you first install Foswiki for most sites (the only exceptions are sites using languages such as Japanese and Chinese where you don't care about WikiWords, or sites where you must mix languages with different 8-bit character sets). Note: you must specify utf-8 and not utf8, which doesn't work on Windows operating systems. 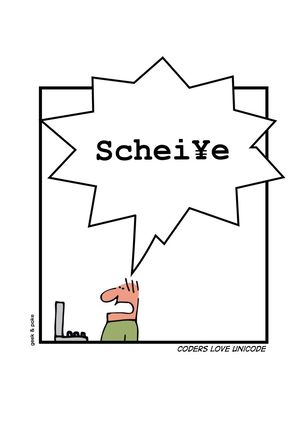 There are a number of major problems with encoding support in Foswiki. It has to be borne in mind that the current code was never intended to support Unicode, so we shouldn't be surprised that there are problems. In addition, lack of regression testing has resulted in some code rot over the years. So, what can be done about all this? Well, there are a number of possible approaches: AFAICT from looking at other wiki implementations, standardisation on UTF-8 is the most popular approach. See http://develop.twiki.org/~twiki4/cgi-bin/view/LitterTray/TestEncodings for a script that should help developers fighting with these problems.

-- CrawfordCurrie - 14 Jun 2008 I have added quite a lot more material above, including a section on URLs, and completely reversed your recommendation to use UTF-8 in current TWiki versions - this breaks many things and is bad idea. It's only a good idea if you like a broken TWiki! Also made quite a few additions above under {Site}{Locale} and {Site}{CharSet} to try and clear up a few things. I now understand better where this is coming from, i.e. the fact that TinyMCE uses Unicode internally and so it's painful to convert to/from the site character set. -- RichardDonkin - 15 Jun 2008 It's worse than that. Browsers use Unicode internally in the sense that Javascript always uses unicode. So this isn't a problem just for Legacy.TinyMCE, it's a problem for all client-side applications as well. AJAX nicely sidesteps the problem because XML is UTF8 encoded by default, but if you are not using AJAX - and most TWiki authors aren't - then it's a serious problem. -- CrawfordCurrie - 15 Jun 2008 Good point about client-side apps generally, I was mostly thinking about server-side as is traditional TWiki but clearly AJAX and so on are increasing demanded. On $regex{validUtf8StringRegex} this is only used in EncodeURLsWithUTF8 (described in URL section above) to determine if a string is truly valid UTF8 (avoiding overlong encodings in UTF8 which can be used in security exploits) or the site charset. Not very efficient on a large amount of data but not too bad on a small amount - e.g. you might try searching for the first high-bit-set byte in a page, grabbing the next 50 bytes, and using that as a heuristic. Since UTF-8 has a very distinctive encoding it's turned out to be quite reliable, and it's based on what an IBM mainframe web server does - see InternationalisationUTF8 for background. -- RichardDonkin - 15 Jun 2008 Don't know were else to place this: are all regular expressions used by TWiki Unicode Regular Expressions or should they be? -- FranzJosefGigler - 20 Oct 2008 Yes and no. The core regexes are compiled to reflect the site character set, so if you select UTF8 on your site, you will get unicode regexes. If we move to unicode in the core, then this complexity disappears. -- CrawfordCurrie - 24 Oct 2008 Correction; if you select UTF8 on your site, you will get utf8 regexes, not unicode regexes. -- CrawfordCurrie - 29 Nov 2011