No matter how cool your interface is, less of it would be better.

We have gotten used to our decade old topic interaction model. Since TWiki Bejing (version 2.0) nothing much has changed in the way we interact with topics: The way topic interaction is organized just raises the bar for new users, and does not help in getting them to intermediate users: there is no way to find out what you can do with a topic (and who reads documentation anyway). We can improve by: Let's do this step by step. The problem can be split up in these parts: 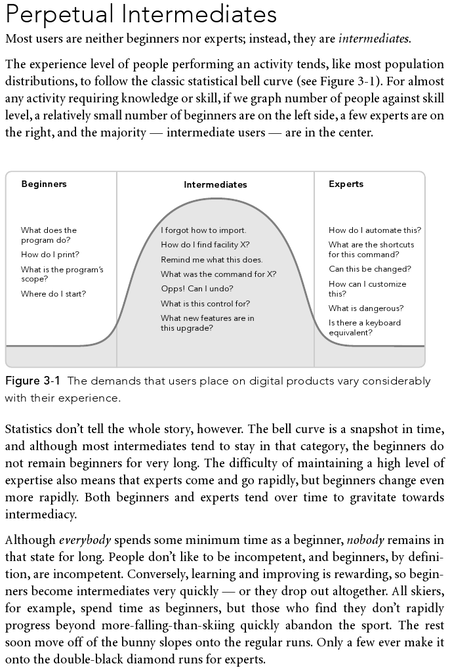 Summary of past opinions and discussion

see rev=38 for all the comments thus far. Summary of stated opinions: We need to further differentiate between no-click features and click-features to come up with the final list of candidates. Currently this is based on heavy wiki users feedback... so this is not a final list of requirements yet. Also consider the context and what information is needed in a given context:
When I'm doing more advanced modifications I'm likely to need more info about macros and stuff. Something not yet integrated in our set of interactions. This Is a regular task which is not at all suported by our interface. Mainly because we treat them as navigation items and we are not particulary good in providing great information architecture. Of course, this is a behaviour pattern of a user somewhere between intermediate and expert. Nontheless we should think about how to support this.

An application that has the same intention, namely grouping related actions on the screen: the application menu of Adobe Acrobat (not the textual menu at the top of the screen):

GMail has a mixture of "direct" buttons and flyout buttons (with arrow):

I have taken a shot at designing the interaction. The menu is really simple now, but that is also the result of removing Print (should be elsewhere on the page), Backlinks (ideas?) and the < < < history links. Also I found the label History to cover the contents well, and making a verb from it would stretch it ("Compare versions" for instance). "New topic" instead of "Create new topic" also works fine.

I have taken a slightly different path... Some thoughts: Possible default view: 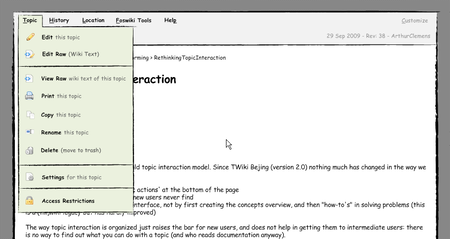 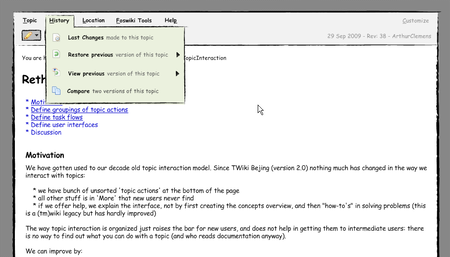 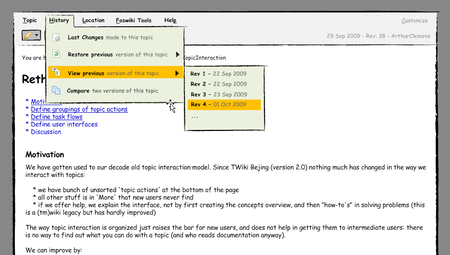 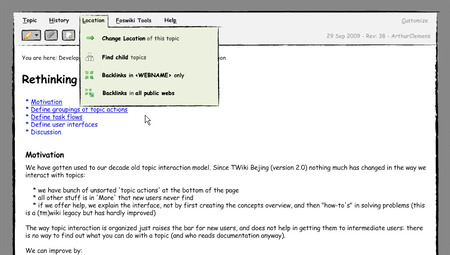 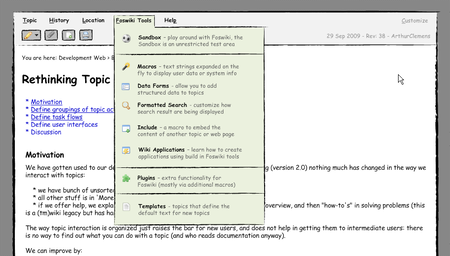 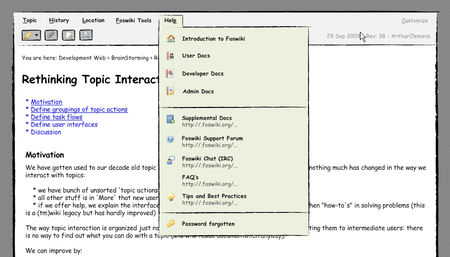 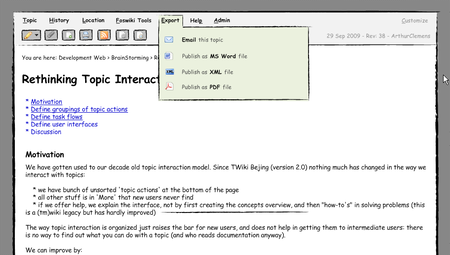 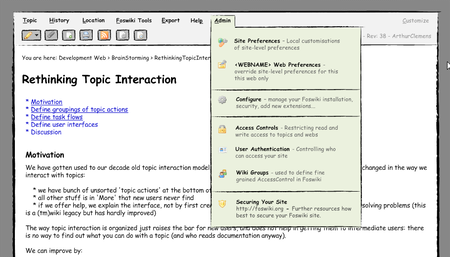 Bottom line: Menus and their content may need fine tuning and the ones among us that lived in fossy-land for too long may need to get over the fact that the interface and wording do not reflect the implementation model 1:1 anymore. However, I think this interface would far better... Again, above screenshots are meant to illustrate the overall concept, no to define a final structure or content. -- CarloSchulz - 05 Oct 2009

see rev=38 for all the comments before 5th Oct 2009. -- CarloSchulz - 05 Oct 2009 I like it: users easily recognize a more application-like interface. One first thought: how does the topic interaction part itself "interact" with the rest of the site, that comes with its own navigation, like sidebars and horiz menus? If you continue to add the rest of a normal webpage around, it might create confusion which parts implement interaction with the site and which part enable interaction with the current topic. Just try adding a horiz site menu. -- MichaelDaum - 05 Oct 2009 I have a version with those sorrounding elements like nav and sidebar already. I just need to play with them a bit more to find out what fits best. Just thought it would be better to discuss the general idea first. Besides your valid points, there is a whole lot more we need to address. The edit screen and others needs to fit into that concept as well. So you are right, no interface part should be treated as single entity -- CarloSchulz - 05 Oct 2009 Some wikis design topic interaction at the very top of the html viewport. So it looks more like a part of the browser than part of the web application. This would distinguish it from site navi at least... -- MichaelDaum - 05 Oct 2009 Carlo, great you are extending and improving upon my line of thought. Nice style BTW, the hand drawn look. A couple of remarks: -- ArthurClemens - 05 Oct 2009 Another app like interface: http://getballpark.com/ -- ArthurClemens - 07 Oct 2009 Thinking about Carlo's application menu it occurred to me that we haven't looked well enough at supporting workflows. Instead we have had a tunnel vision on the view screen. If you look at Foswiki as an application supporting an editor (everyone who edits pages), the view screen is often in the way. Let's take a number of workflows where actions are chained - and these are not uncommon: Why are these flows more difficult than they should? All these flows could be much improved by having a consistent application like menu, at the same location, across all screens. Compare for instance how WordPress or Content Management Systems deal with this: the view is the live site, somewhere out there, while all the action takes place in a workflow environment. My proposal is similar to Carlo's but has some differences. Similar: Differences: This is a simple flow, on a view page clicking on an edit button. On the edit screen the top menu becomes visible. After saving, the top menu stays in place above the view screen. It can be hidden with a button click. 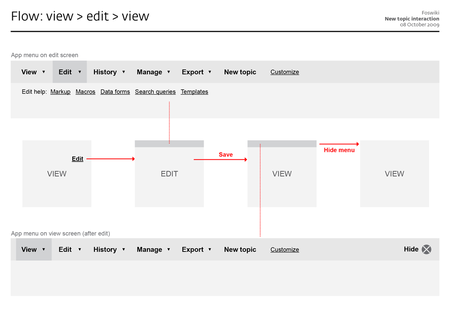 The action menus are evolved from the previous versions. 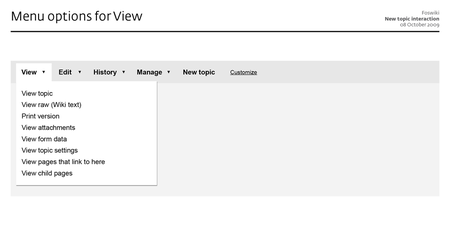 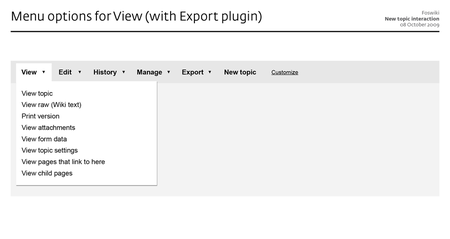 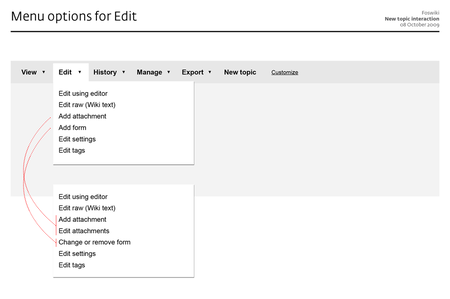 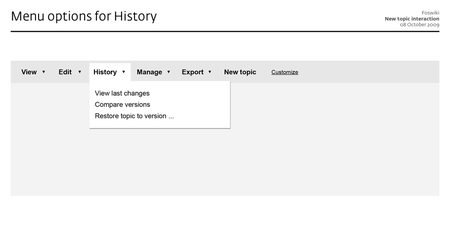 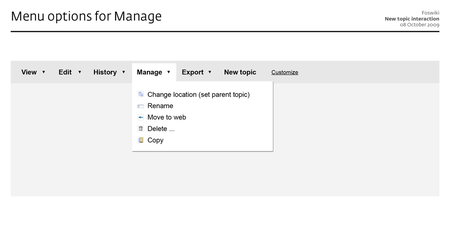 -- ArthurClemens - 08 Oct 2009 Some tasks that might need a place on the app menu as well even though they are not topic actions. These are all actions that are of interest to an admin only. So they should be hidden from non-admins. -- MichaelDaum - 09 Oct 2009 This is an example of an admin menu, that would appear once logged in as admin, or if you are member of the admin group: 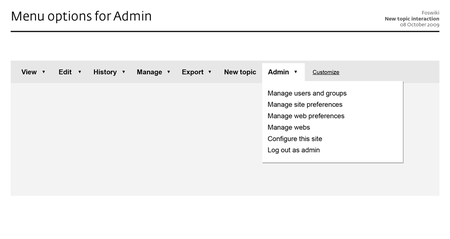 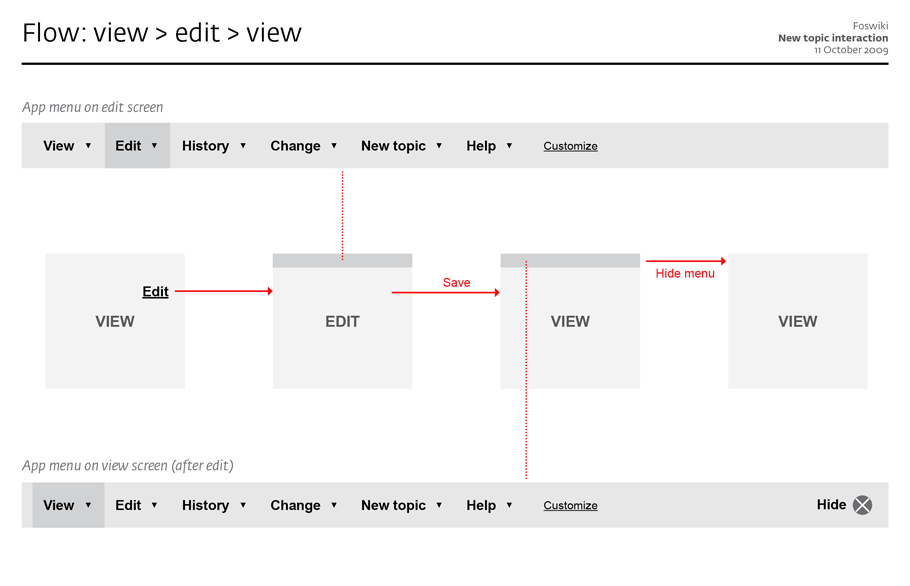 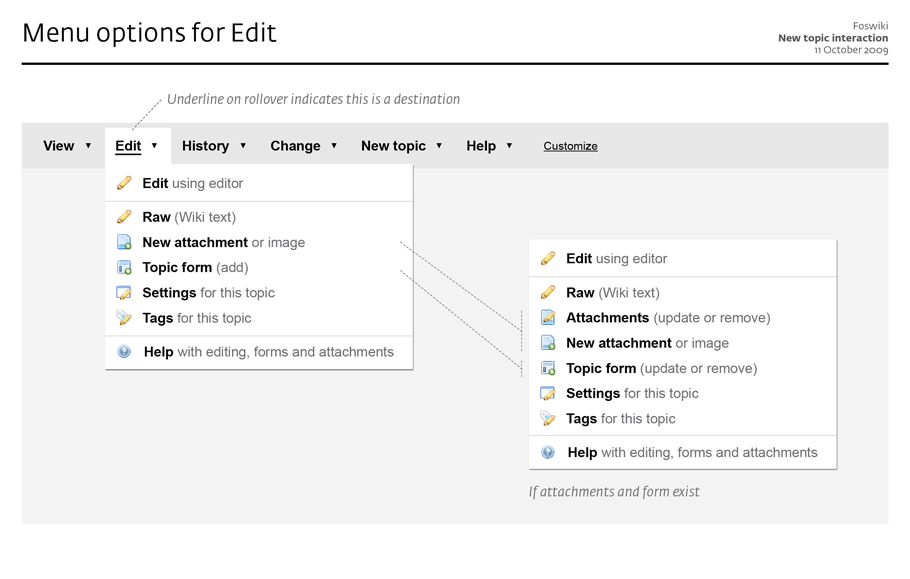 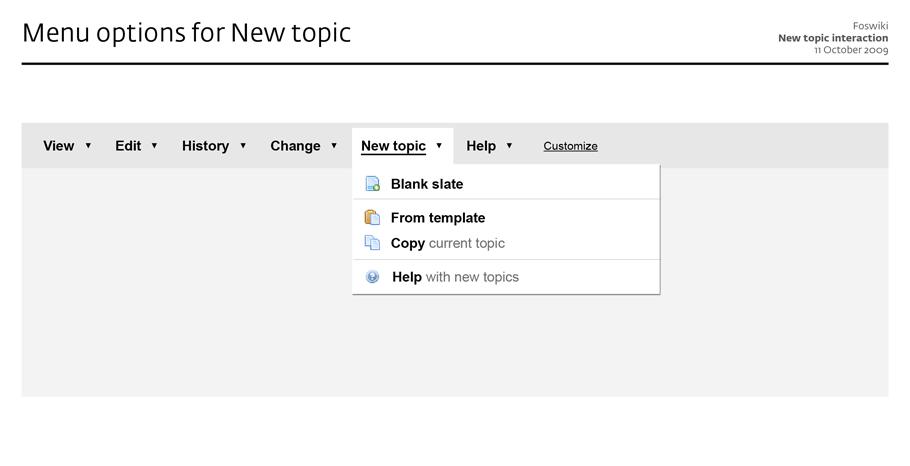 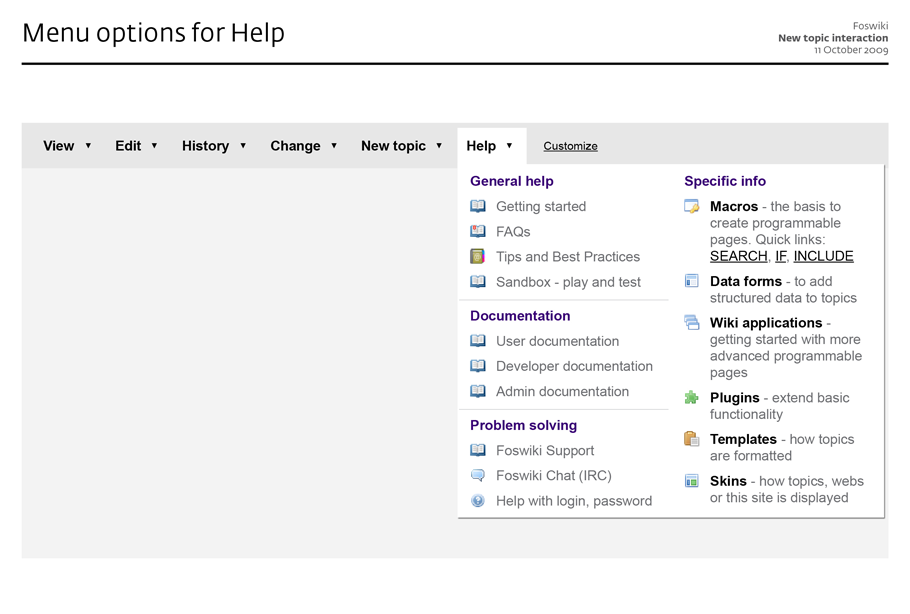 -- MartinSeibert - 11 Oct 2009 Here are some unordered remarks. "Edit" and "Change" as label for these two menus are very close semantically. Some of the "Edit/Change" actions are probably already reachable as part of the edit screen. The current menu as far as I understand is a menu for the view screen. There might be some actions that could be deferred to the edit screen. Candidates are: Add/remove form, Settings, Repartent, Attachments, Tagging, Rename/Change title. All of these are arguable of course. The point is that I have the feeling that there are too many things to "Edit" or "Change". "New topic" is an area that needs to be customizable. For instance, if you deployed a blog, bug tracker, time tracker, project management app in the current web, users want to create a new topic of a very specific kind, e.g. "New discussion", "New bugreport", "New ...". This highly interferes with the templates each of these topic types need.... -- MichaelDaum - 11 Oct 20 The current menu as far as I understand is a menu for the view screen - no, this is the menu for all screens, except when on the screen itself, the menu item is highlighted. The links in the fold out menu are shortcuts to specific screens, for instance a Settings screen, or a edit tags screen (if a tag plugin is installed). -- ArthurClemens - 11 Oct 2009 The next step should be a prototype, to give a feeling of the interaction of the menu with topic states. -- ArthurClemens - 25 Oct 2009 on the prototype: I'm almost done I just need to update it to thel latest version (11 Oct. 2009) -- CarloSchulz - 26 Oct 2009 a limited prototype is now available on RethinkingTopicInteractionPrototype -- CarloSchulz - 03 Nov 2009 The Wikipedia makeover (currently in beta) has some similarities (but is also very different):

-- ArthurClemens - 04 Nov 2009 I have created a design mockup with an inpage menu: The original idea, with arrows indicating dropdowns (but that increase feeling of clutter). The menu is dimmed to 'integrate' into the page:

With rollover, a menu dropdown pane appears (quick and dirty pane thrown in):

-- ArthurClemens - 04 Nov 2009 Thanks for the mockup. Illustrates quite clearly that this approach easily leads to clutter: site navi + breadcrumbs + menu ... that's too much. Can you create a prototype moving the menu to the very top of the viewport? -- MichaelDaum - 05 Nov 2009 I will publish an additional version of my prototype to have the menu on top of the viewport. Will upload tonight... -- CarloSchulz - 05 Nov 2009 Many nice examples and something to look forward to. I have two concerns. The examples have lately been shown with the Foswiki skin where webs are at the top bar. Most corporate users have 10-200 webs and will never use a skin with webs at the top bar. We can see in our Foswiki project that we have reached the limit and we have webs you cannot access via the top bar. So we need to also remember the skins where webs are listed in the left bar. And I actually think a lot of the menu systems would function much better (be less of a clutter) if the menu system was graphically more part of the top bar area. The other concern I have is that the requirement of having 1-click toolbar for the most common operations have not been shown. You have correctly captured this requirement in the introduction of this topic. It is only around 4 to 6 buttons we need. But we need to remember to include them in our examples so they do not get added afterwards looking like one fat oops. But again. Very nice work you guys are doing with one good looking example after the other. -- KennethLavrsen - 05 Nov 2009 Kenneth, you might want to check out RethinkingTopicInteractionPrototype. -- CarloSchulz - 05 Nov 2009 new prototype with viewport not ready yet. but here are some screenshots... 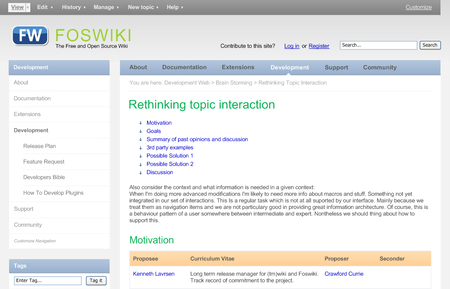 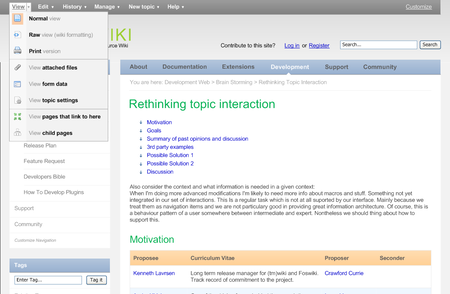 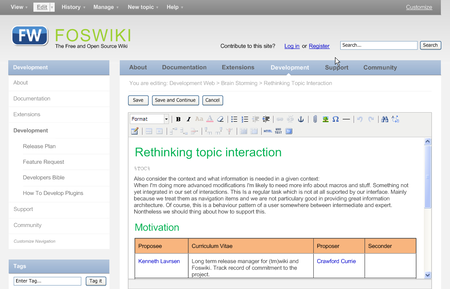 On a light background:

-- ArthurClemens - 05 Nov 2009 Ok, both versions seem to work from a pure visual perspective. So viewport seems to be the smarter alternative as it allows horizontal nav bars whitout cluttering everything. Need to see how it works with a small prototype... -- CarloSchulz - 06 Nov 2009 For comparison, see also the screencast of EditMe. -- ArthurClemens - 10 Nov 2009 I like the new menu style interface, it adds a lot to the overall system. I would also like to see the Left Nav bar have the following If Show is selected the Left Nav Bar will always be displayed If No Show is selected the Left Nav Bar will never be displayed If Dynamic is selected then Hovering/Clicking the Left Icon (containing text 'Nav Bar') will cause the Nav Bar to be Displayed until a selection is made or the user moves the mouse cursor out of the Displayed Nav Bar. -- JtHolmes - 25 Dec 2009