Priority: Normal
Current State: Closed
Released In:
Target Release: n/a
Applies To: Extension
Component: MenuListPlugin
Branches:
Reported By: IngoKappler
Waiting For:
Last Change By: IngoKappler
I've put the list into Sandbox.MenuTopic and then wrote in WebLeftBar: ...but nothing shows up. Please find here the topic "source code" and a screenshot of the situation where the list definition and the MENULIST are used in the same topic: 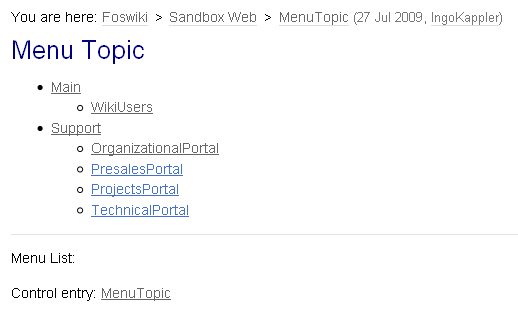 MenuListPlugin does not render any output
Used skin is pattern. -- IngoKappler - 27 Jul 2009 can I say, doh. Sorry, blinkered by the current use case, I'll go poke that. the client I quickly wrote this for needed what is now quiet output (done & uploaded) thanks. -- SvenDowideit - 01 Aug 2009 Hey thanks, now it renders something. But seems it doesn't render everything. Putting this in MenuTopic... ...will render as (missing foldings, levels): 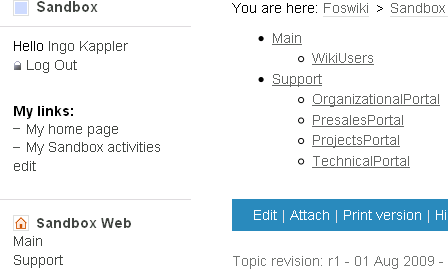 MenuListPlugin does not render foldings
-- IngoKappler - 01 Aug 2009 from what you show, its working exactly like intended - the collapse mode (the default) will only show the leaves of the current topic (and back to the root of the menu). perhaps you're wanting the full mode? if not, tell me more about what you're after

-- SvenDowideit - 02 Aug 2009 I am not sure I understand how it should exactly work. What I was looking for was the possibility to add a single entry to the WebLeftBar which could be folded/unfolded to show the configured sub entries. I didn't manage to get some subfolding visible in the WebLeftBar. If I defined a topic in MenuTopic and then browsed to it, it wasn't necessarily shown in the WebLeftBar, e.g. I defined in MenuTopic: Then browsed to VotePluginTestResults and would expect to see this topic in the list. But the list shows:

MMenuListPlugin_behaviour1.png
I thought this should open up the tree at least until the topic one looks at, shouldn't it? I am under the impression that I only see the topics which are on the first level but not the ones any level further down. -- IngoKappler - 04 Aug 2009 Sven, thanks for fixing it in the first place.

I now implemented a simpler structure not using foldings in my WebLeftBar. So for now I gave up looking for a folding solution. I'd have liked to understand this plugin better but it seems to behave different from my expectations, so understanding it may have enabled me to possibly improve documentation. Any case, I now closed this task again.