Hi. We are really struggling with performance issues since moving from TWiki (4.0.5) to Foswiki (1.0.9). We have upgraded our server hardware (4 x 3.0Ghz running RH3, 6Gb memory) and we think we have tried all the obvious suggestions (running fastcgi, compressing javascript/css). We very willing to do the leg work to debug the performance issues we are having, but need some advice where to start. At the moment, the server is not at all loaded, and a view of an empty page is taking around 2.5 seconds. I have attached below a snapshot from firebug, and the time is taken during the GET of the topic text. How do we go about debugging exactly what the server is taking 2.5 seconds to do? Any advice is appreciated - at the moment, we feel that moving from TWiki to Foswiki has been a step backwards. We have a lot of confidence in the foswiki team, so are sure there must be some local configuration we are missing, but we don't know how to isolate it. Your advice is appreciated, Steve. 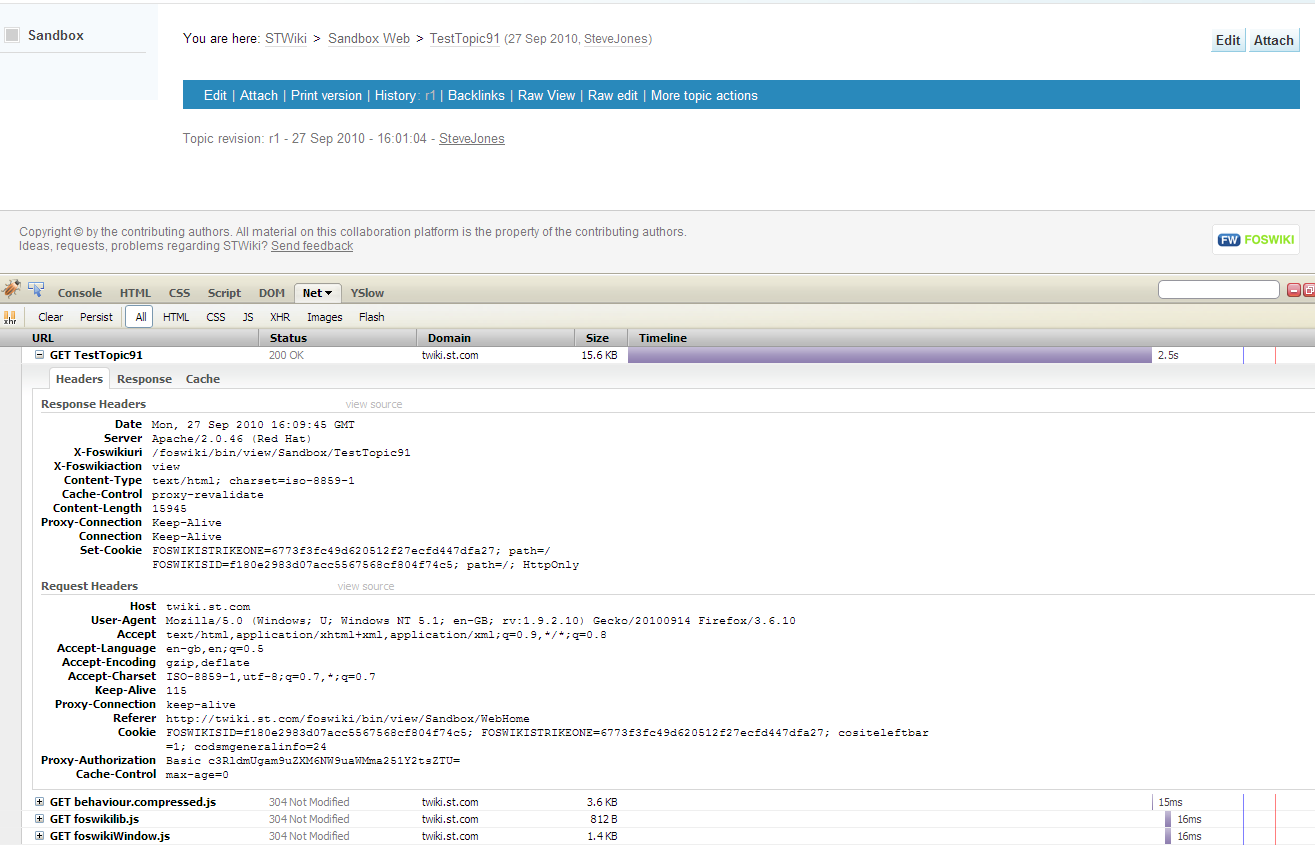 A few general checkpoints I can think of (running apache): On my Ubuntu 8.04 server, 32-bit virtual machine (ESX 3.5) a new blank page in Sandbox renders now in 0.4xx seconds, repeatedly (by click on link from Sandbox webhome). Hitting F5 for a page refresh takes longer as I believe the browser discards some cached content, it varies from 0.5 to 2 secs. -- LarsEik - 27 Sep 2010 You can also test the performance of the scripts outside of the influence of Apache by running them and timing them from the shell (cd to the bin directory). For example: If the times are short in the shell environment, then it points to something in the web env. If the above suggestions don't point to where the time is being spent and you want to bring out the heavy artillery, you can use something like CPAN:Devel::NYTProf to profile the code. This is pretty complex, so it needs some familiarity on Foswiki internal architecture. Install Devel::NYTProf using CPAN, and then profile the script. The analysis is written as HTML to the nytprof directory using nytprofhtml This generally will show you exactly where time is being spent. -- GeorgeClark - 27 Sep 2010 There are a couple of non-core things that can also load up the rendering time - skin choice, and plugin choices. if you're getting 2.5 seconds to render a topic in the 'System' web without having added a skin or extra plugins into the mix, then there is something quite odd going on. another issue can happen with large webs - 50,000 topics etc - which we're working on atm - though that was worse on twiki, so I hope is not your problem. -- SvenDowideit - 28 Sep 2010 Hi I'm working with Steve on this. According to nytprof, I've noticed that Foswiki::Sandbox:: CORE:readline takes up a lot of time for longer pages. Another intensive sub seems to be Foswiki::Store::RcsFile:: getTopicNames Here's a summary of nytprof output for a Sandbox page which consists of hundreds of TABLE tags. The Sandbox topic I'm using for testing can be viewed here: http://www.foswiki.org/Sandbox/TestTopic44581 Is there anything I could try that might speed up readline or getTopicNames? Thanks. -- NeilMcKett - 29 Sep 2010 Regarding the getTopicNames: the first (major) performance improvement I made when I migrated from T to Foswiki, was to eliminate use of the %WEBLIST macro in the WebLeftBar. It is quite slow and perhaps this is causing getTopicNames() calls (I don't really know). As we only add new webs maybe once a month, I created a page that 'compiles' the list of webs statically into a dedicated topic so we now have %INCLUDE{"Main.WebNAV"}% instead of %<nopWEBLIST%. Please re-do your timings by nop'ing out the WEBLIST in your WebLeftBar or try ?skin=plain in the URL (or -skin plain on the command line) I'm also wondering about the web you're viewing the topic from. I'd like to know the response time of say, System.WebHome - both pattern and plain skins. If System is also slow, then I'd start wondering about your server's filesystem (fragmentation?) or disk i/o... For what it's worth, Foswiki 1.1 might perform better on large webs (especially where SEARCHs are involved), and it also has a PageCache feature. -- PaulHarvey - 01 Oct 2010 Were you ever able to resolve your performance issues? -- GeorgeClark - 27 Nov 2011 I created BestPracticeTip20 to document one way of removing WEBLIST usage -- PaulHarvey - 01 Oct 2010