Create the possibility for a display title (the way a topic is shown as link) for every topic.

More...Close
Display (topic) names are useful for several reasons. They: There are several ways to create a display name: Why not always use display names? If we want to keep all that, we can say: More rules:
-- ArthurClemens - 16 Feb 2006

This is exaclty what I want! The most wanted feature is a good looking page title in the browser window!!! In my opinion, it is not necessary to use the costly TOC algorithm but instead use always the '---+' header one tag for page titles, as even if not using a header but some sections, in most cases nobody want section A to be a header for a document, that contains also section B and C (in the same level). So, if no TOC is requested, there should be no need for an extra rendering-just-for-toc-generation step. On most pages this header tag will used together with '!!', so '---+!!' is definitelly a header, no need to search for more. So, what minimal effort has to be done?
Number of topics: 0
= and maybe other makros Some guidelines for the documentation when to use short and when long links would be a good idea, too. So, anybody there, who is not convinced yet? Are you happy with a start page called 'Legacy.WebHome' instead of 'Welcome to the Collaboration Plattform of XYZ'? Please try Google:Legacy.WebHome - I got more then 12.000.000 results and more then 6.000.000 for Google:'Legacy.WebHome Main'. Looks funny, and I'm sure, your company XYZ is under the top ten.

PS. As mine label ist not the famous XYZ, I'm still looking for a quick patch against Dakar to reach the second step as fast as possible. Atm I set PAGETITLE manually.

-- TobiasRoeser - 22 Feb 2006 There is no need for the IF. Add the Topic Display Name var to the core and default it to %!TOPIC% -- RafaelAlvarez - 23 Feb 2006 What is the preferred way to set a variable (PAGETITLE) programmatic, that can be seen in a template file? Is it neccessary to write a plugin? And when, what is the best call (to TWiki::Func) to set such a variable. -- TobiasRoeser - 30 Mar 2006 I think that we need a either a new plugin handler (to make it a plugin) or to change the way the WikiWord links are rendered. -- RafaelAlvarez - 30 Mar 2006 Sorry, but the latter part is not clear for me. What I want to know is how to set a (internal) variable PAGETITLE (our page title var) calculated while processing the page so that the value of PAGETITLE is available when the page gets rendered using a template. So the value of this variable PAGETITLE should expanded in the template like any other variable e.g. TOPIC. Why we have to change the way of rendering WikiWords? -- TobiasRoeser - 31 Mar 2006 Ahh, you mean that. Just set a preference in the page. Ex: will be rendered as "Topic Display Name" wherever %PAGETITLE% is used. I was thinking more along the lines that when TopicDisplayName is referenced, Topic Display Name is rendered. For that you need to modify the way wikiwords are rendered. -- RafaelAlvarez - 31 Mar 2006 A thanks for clarification. But the Set PAGETITLE option is what I use already (see post from 22 Feb). I want to set this programmatic instead of manually. So, while TWiki parses the page, it recognizes a ---+!! and if it not finds a Set PAGETITLE then is assumes the heading of the page as PAGETITLE. This way, you can always override the page title, but if not, its default is the page heading. But to render this title, we have to set a preferences variable which is visible in the view template anyway. But until now, I could not find any TWiki function, that can set a new preferences variable. For topic references, I like Arthurs suggestion. Don't change the default behaviour and provide a new link style e.g. [[^SomeName]] which expand to the full page title because of the presence of the '^' sign. -- TobiasRoeser - 31 Mar 2006 The first step would be adding a handful of Preference functions which would operate on the settings part of a topic; i.e. SetPreference, GetPreference, ClearPreference. These could then be used to set the pagetitle in some automatic, as-yet-unspecified way. -- MeredithLesly - 31 Mar 2006 A thanks, then I was right, that there is not such function at the moment.

Ok, first I will get my SearchByCreateDate patch finished. Afterwards, I will try to prepare some patches for discussion, but this can take some time, as I have to get prepared for my final examinations. 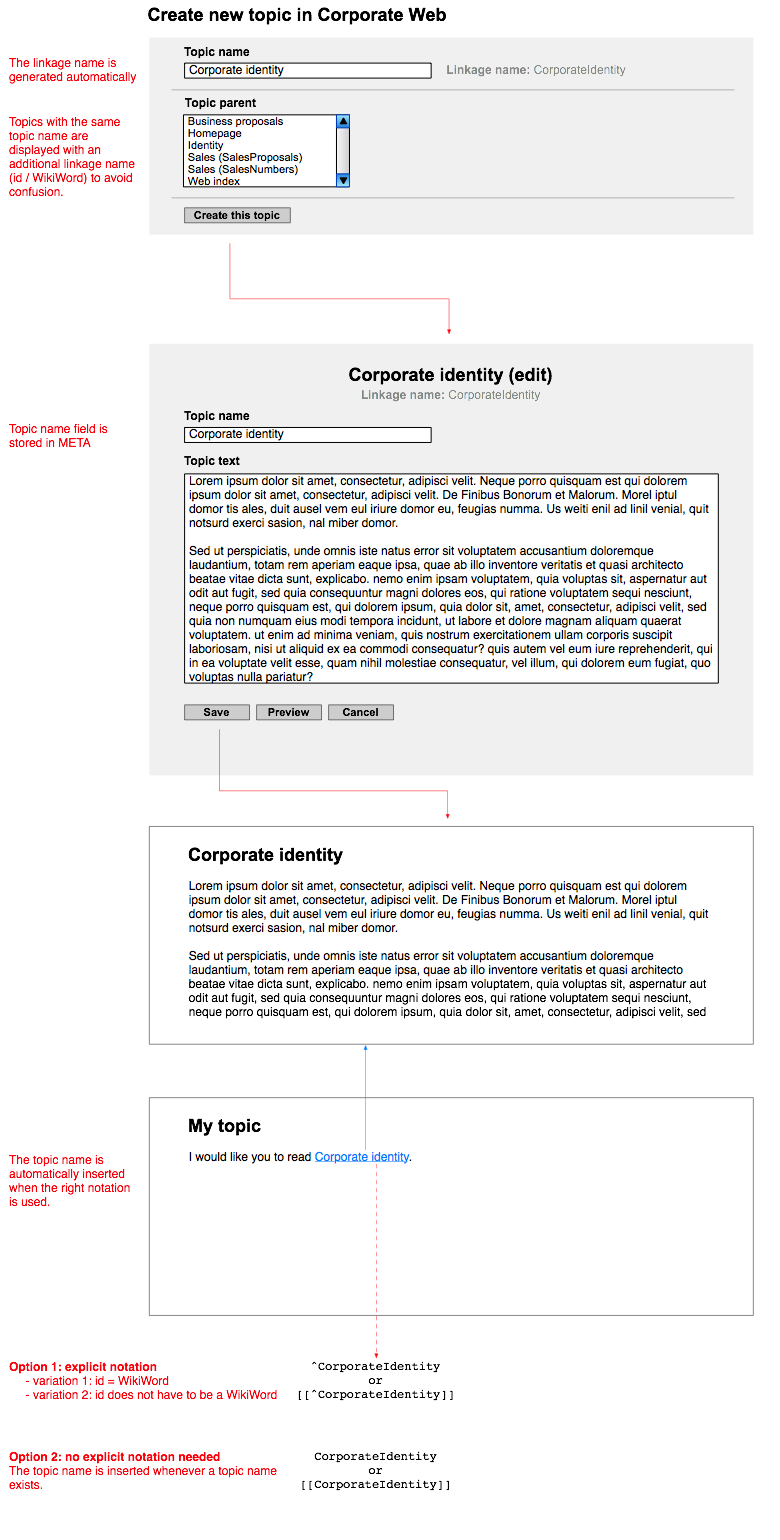 -- MichaelDaum - 10 Nov 2008 - 07:40 Because this is done by DBCachePlugin / DBCacheContrib? -- ArthurClemens - 10 Nov 2008 - 09:52 That's the fastest we can do that trick right now. This duo is going to be replaced the long run anyway using a real DB backend. So it is seems to be the right way to go for now. -- MichaelDaum - 10 Nov 2008 - 12:59 (from http://irclogs.foswiki.org/bin/irclogger_log/foswiki?date=2013-10-17,Thu) TWiki finally implemented TopicTitle. See http://twiki.org/cgi-bin/view/Codev/TopicDisplayName, http://twiki.org/cgi-bin/view/Codev/ShowTopicTitleInLinks and http://twiki.org/cgi-bin/view/TWiki/VarTOPICTITLE Their specs are: store the TopicTitle in a Title formfield if present; fall back to storing it as a TITLE preference variable DBCachePlugin does the same but uses a TopicTitle formfield or a TOPICTITLE preference variable which is better imho as a Title formfield conflicts with lots of DataForms using Title for something completely different rather than the display name of a topic. E.g. when describing a person Title is something like Mr, Mrs, Dr, Prof or the like. I haven't looked at the code they added to TWiki-Core to implement it as this is yet to be released as TWiki-6.0. I wonder though whether they deal with topics that already have a TOPICTITLE preference setting but receive a DataForm later on having a TopicTitle formfield. DBCachePlugin covers these cases by migrating the store location in both directions: (1) adding a form (2) removing a form . Foswiki-core should add the notion of a TopicTitle as well moving the feature from DBCachePlugin into the core. With NatEditPlugin being part of the core we are all set in this respect. Hower there's another important point: renaming a topic there are a few overlapping use cases here jquery.wikiword helps with (1) and is the default in NatSkin. so you don't have to think about proper WikiWords anymore. With regards to (2) when people change the TopicTitle a lot over time while the TopicName stays as it is (stable urls) the danger is that both deviate from each other too much In this case (4) the UI needs a way to rename the topic matching the TopicTitle changes as close as possible, again using jquery.wikiword. This is covered in NatSkin as well: two input fields - one for the TopicTitle, one for the TopicName - and a checkbox "derive from TopicTitle" which automates the generation of a TopicName matching the TopicTitle as close as possible according to the definition of a WikiWord. About (5): what users see is the TopicTitle. Wikiapps however operate on TopicNames. So autocomplete and select+values interfaces used to chose a topic need to display the TopicTitle while selecting the TopicName as the actual value. This needs changes to any "pick from list" interface to handle topic parents or the like. The TopicTitle proposal logically leads to WebTitles: the display text when linking to SomeWeb Both TopicTitles and WebTitles play an important role in breadcrumbs. Having worked with TopicTitles in various wiki apps yet another use case came up: the TopicTitle being agregated by two or more other formfields of a DataForm. In some wiki apps it makes more sense to automate the TopicTitle using two or more formfields I hope to cover this use case better than before with the next release of MoreFormfieldsContrib which will come with an autofill formfield type. this one will be auto-filled by concatenating formfields of the same DataForm being saved. This works out fine in the current implementation but hasn't been fool-proven in real-world projects yet. So a TopicTitle formfield of type autofill will then be able to generate proper TopicTitles - and thus link texts - based on more complex scenarios. Example of an autofill TopicTitle -- MichaelDaum - 17 Oct 2013 Some operations, like renaming a topic based on its title, requires AddFoswikiFuncWikifyWebTopicName -- MichaelDaum - 02 Apr 2014 I would like to see a specific TopicTitlePlugin that would add support for a new metadata value META:TOPICTITLE, and the related ability to access and set that value with appropriate security checks. I think this would improve upon the NatEditPlugin + DBCachePlugin combination by making it easier to include edit fields for the title in arbitrary topics and templates, eliminate the requirement for NatEditPlugin to get a title field during edit, and create a consistent storage field for the title instead of the DBCachePlugin supported TOPICTITLE preference or TopicTitle form field. (Isn't DBCachePlugin an odd place to implement this feature anyway?) I have implemented a prototype of this concept using MetaDataPlugin, a few parameterized macros and pattern skin customizations. Features of this implementation: Problems: Setup: -- DavidAllen - 16 May 2014 MetaDataPlugin ... wooops, I can't see why you use it for this purpose. Foswiki itself can store topic titles just fine. The reason DBCachePlugin is involved is just for the rendering speedup when it fetches the topic title in the renderWikiWordHandler. NatEditPlugin is there for the edit interface and to store a topic title submitted during a save into the right place. This handler also deals with topic titles being stored in different places: either in a TopicTitle formfield or a TOPICTITLE preference setting. It also deals with DataForms being added or stripped off during save and thus migration of the storage from preference setting to a formfield and vice versa. So there is definitely more that needs taking care that I'd rather not encode in TML purely as you did. Note that NatEditPlugin has been added as a default core plugin to be released together starting with Foswiki 1.2.0. So whenever we talk about the edit interface, please use it as a baseline. I've added an Impact and Implementation section above to outline the planned activities. I've reset the DataOfCommitment. So the clock for this proposal starts ticking now. If nobody raises concerns, the thing is accepted within 14 days. -- MichaelDaum - 16 May 2014