I have been using Foswiki to build a small scale personal website, https://colas.nahaboo.net (not a lot of contents yet) open to the web, but only edited by me. Although at the opposite of Foswiki original natural ecosystem of collaborative intranets, it is an interesting experience. I will dump here what are my ideas about this use case, and star (

) what I think could be important feature of a "public web site mode". I think that Foswiki thus can make a very decent, powerful and pleasant small-to medium scale CMS. However, I will probably now begin to write my own system from scratch, to go further in the Desktop editing + minimalism directons. But I will continue to use Foswiki for my internal famillial collaborative site, but maybe with some experiments to develop Markdown use + desktop editing + Content topics.

There could be however very different ways to tackle this issue. -- ColasNahaboo, 2020-12-05

Here is a view on my Public skin (the plus signs "+" link to more detailed pages, eg "Advanced search" for search). I got rid of the bottom toolbar entierely, and I am even looking at removing the side bar totally. 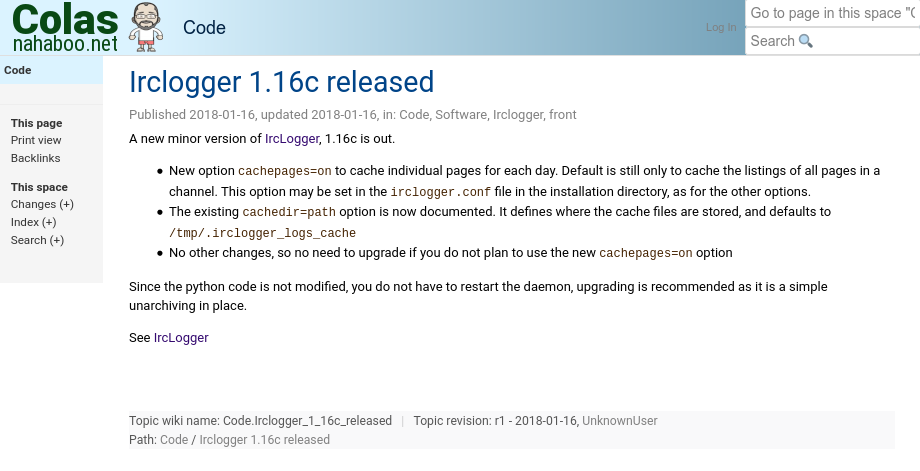 Here the logged-in view, with all Foswiki power: 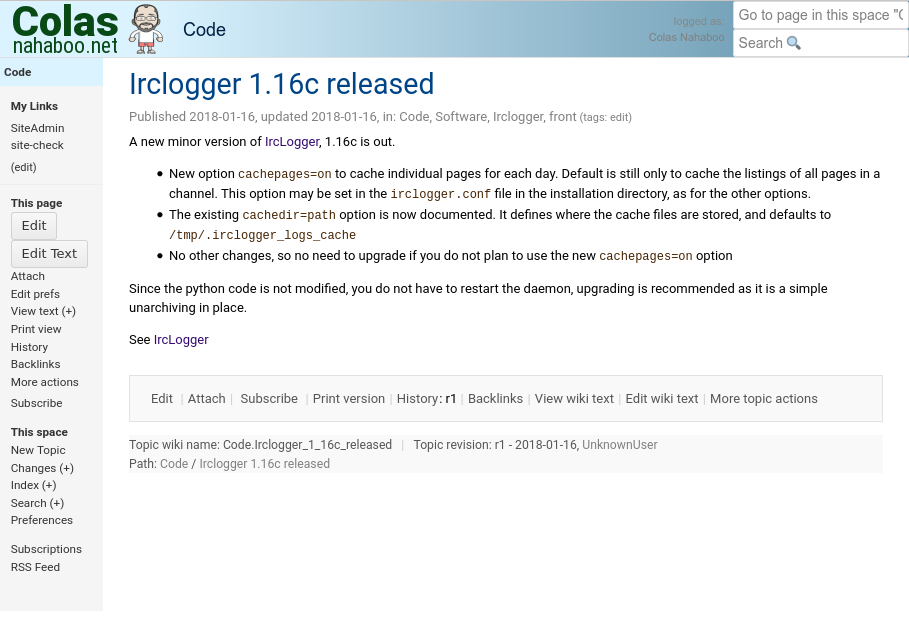 Markdown: I am quite ambivalent about markdown. Pro: lots of projects are actively using it and developing software for it. i.e. CKEdit 5 has got a markdown build that lets you edit markdown in wysiwyg mode directy, that is you spare the bl*dy WysiwygPlugin having to translate HTML to markdown. Cons: markdown is not standardized despite all of the efforts. Most importantly in the area images and tables. MediaWiki markup and Foswiki TML are more stable/standardized/powerfull compared to markdown. Robots: arent such a problem anymore as far as I see. You need fail2ban or CrowdSec for one. I tend to hide all of System using AutoRedirectPlugin. PatternSkin is quite bad with regards to robots as you already mentioned. So is TablePlugin. SEO: is more important than robots. You need proper meta data to make pages share-able on social networks Mobile: This is a must-have. You definitely need to provide a good user experience on mobile deviecs. SEO depends on it too. Comments: There are two commenting systems available that let you implement anonymous commenting: MetaCommentPlugin and DisqusPlugin Tags: The best tagging ... and category system available is ClassificationPlugin Content: BlogPlugin lets you cover most of what you would do with WordPress in that area, such as target audience, scheduled publishing/unpublishing, multi-authored blog postings, categories, tags, commenting, seo metadata, etc. See our own Foswiki blog for instance. Caching: using Varnish is definitely something I always wanted to do as well. However Foswiki's own PageCaching was already good enough lowering the pain points below a certain degree that I would feel the urge to go for Varnish or the like. Design: It is mandatory to come up with a modern design. Not funky, just modern. Definitely not PatternSkin-ish as thats too 80ies. There are a couple of good examples using Foswiki in that direction: Lots more behind firewalls. I am running it as a non-wiki site for my own homepage since the beginning. SEO is the only real problem ... and probably always will be given the moving standards in this area. 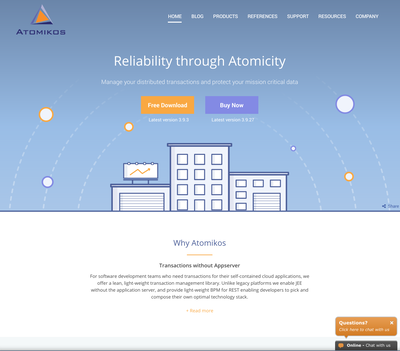 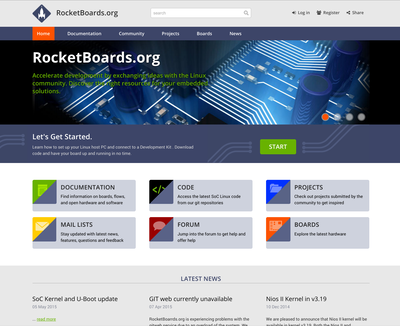 -- MichaelDaum - 05 Dec 2020 Very interesting comments, Michael!
What I would add: Markdown is just there, I now use it all the time (with marktext). And I only use the GitHub version (or rather, the subset understood by pandoc gfm and marktext) which has become the de facto standard. This is the one of the main reasons I am considering moving away from Foswiki. Robots: I use fail2ban, quite powerful. But removing all uneeded links beforehand is safer than having to dwelve into complex fail2ban rules. Comments: Disqus is not reliable, it can disappear at any time, self hosted comment engines are much better. I was using JS-KIT, a predecessor of Discus, but it disappeared with all my comments. Tags: Your plugin system is nice, I started to use it, but has it had too much dependencies on your underlying framework and was harder to cache or integrate into a faceted search than a simpler system. I wanted to be keep open the possibility to migrate out of Foswiki some day. Blog: the previous version of my site (last 10 years... time flies) was actually using a variant of the BlogPlugin Caching: Varnish is nice, but you cannot use it on only some Virtual hosts. The Apache disk cache is both ultra efficient (at the very front end), simple and standard. PHP devs tend to use varnish because often their PHP systems (Wordpress) are not good web citizens and cannot be efficiently cached by Apache Basically, I have been in a trip to get rid of everything and go back to the basics: just Apache, Linux, and HTML5 and CSS4. And it is incredible how this is powerful in 2020 and you can get rid of 99% of the recent web frameworks that have grown organically over the years to remedy to the braindeadness of IE. For instance, I will base myself on the Apache cache, and ditch technologies that do not work well with it or try to re-invent this wheel, but less efficiently. And my use of Foswiki does not fit anymore in this personal crusade

-- ColasNahaboo - 05 Dec 2020 Maybe it is time to make Foswiki's markup engine configurable in order to be able to adopt markdown alongside TML. Anybody interested diving into it? -- MichaelDaum - 05 Dec 2020 ClassificationPlugin is indeed integrated into SolrPlugin to implement a facetted tag search.

-- MichaelDaum - 05 Dec 2020 Edited my top post to mention: Also I am now experimentally writing new articles in Markdown, with a desktop editor, with the following hack, which seems to work nicely for my use case (always editing from the same computer). This is what I do now ,and plan to do: I realised that these Foswiki/MD hybrid topics were actually comprised of the contents in MD and metadata (topicinfo, form meta, topictitle prref var...). And it is suspiciously similar to what most web engines using markdown are doing: they manage not pure MD pages, but pages with a "front matter", a header of metadata written most frequently in YAML, but also TOML, JSON, ... (see for instance Hugo). I wonder if Foswii could become an engine with MD pages as contents but TML for the "front matter" and "glue" or "engine" content-less pages such as search, backlinks, changes, ... -- ColasNahaboo - 07 Dec 2020 Maybe WebDAVContrib could be interesting for your: it allows to mount Foswiki as a network drive and edit files directly in your favorite editor. Deals with locking as well. -- MichaelDaum - 07 Dec 2020 Yes Webdav is interesting, but rsync is lighter and faster as it only transmits the diffs. Plus my scripts can then trigger side effects like rebuilding some search indexes, invalidating some caches, ... Also, with my solution I have the convenience of just clicking a "edit" button on the page itself, rather than navigating a filesystem to find back my topic. Incidentally this is seen as the major drawback of the current static website generators, and that make some people revert back to dynamic sites: being able to "edit in place". But it is an interesting idea, I will try it! -- ColasNahaboo - 07 Dec 2020 I now use a preference variable on topics TOPICFORMAT = MD, and display on them an "Edit MD" button instead of the normal Wysiwyg "Edit" (*) button. Next step is to tweak the Markdown plugin to render topics as MD if they have this pref set, minus any %META: lines, so that I do not have to add the START/STOPMARKDOWN manually to it. (*) via code like: %IF{"context authenticated and $TOPICFORMAT='MD'"... -- ColasNahaboo - 07 Dec 2020 I now use for all anchors ("A" elements) that link to a different way to present the information, but not to information not already available in the sitemap, a "defanged" version that crawlers cannot follow, e.g: <a class=href data-href="url..."> Then, after the page loaded, I have some javascript code that copies the data-href attribute into an href attribute, thus making the link cliquable for humans. It also works for accessible browsers, if you use a <body aria-live=off directive. The code: For instance, I have defined a searchformat.tmpl for my skin that uses non-crawlable anchors for the prev/next arrows to paginate search results: PS: my site is now live at https://colas.nahaboo.net Contents is ridiculously poor now, I am prepping the engine to start writing contents when I retire in March. The goal for me is to be able to write contents in Markdown contents + frontmatter yaml metadata, so that I can transition to another web engine in the future, most probably one that I will write myself, as it has been a itching me for a very long time. Ideally I could thus reuse the contents nearly as-is on this future engine. And I may even keep Foswiki as the backoffice, publishing on the web directly or via a static web generator. -- ColasNahaboo - 12 Dec 2020