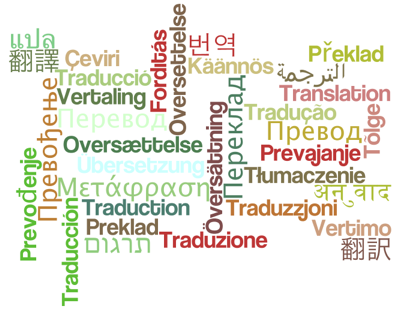 Target completion date: 01 Aug 2009 See TranslationTeam to support our translation effort! If you want to participate in the overall project, add your name to the "*Participants*" field in the form.

Provide coordination,translations, and tools for the internationalisation effort. This includes

Suggested Plan for the task team

Set up a translation framework

For (2) the documentation should first be written properly, before it got translated to 12+ languages.

It would be good to include the TranslationTaskTeam in this team too, as they will have an influence on how documents are worded. -- SvenDowideit - 04 Nov 2008 I am not sure if a TranslationTaskTeam will have influence on how the (original) documents are worded. But I think there have to be various steps that should be considered for documentation and, later on, the corresponding translations: -- SebastianKlus - 06 Nov 2008 [...] Has something like Google Translate been considered to assist in automating some of the translation? Probably it would not give a very polished translation, but the places it would have difficulty might be somewhat predictable, so that a second stage of processing could be done in Perl, followed by a final proof-reading by a human fluent in the language. -- MartyBrandon - 10 Nov 2008 - 10:53 Added myself, you already know why, now in order to help in the documentation translation I have to have some copy of the documentation in a special page in order to translate or whatever... Special note: Can you separate pt-br from pt-pt on the translators list? In order to I add myself? -- CarlosBarros carlos, separated. please add yourself to the list as appropriate. the only reason it wasn't already separated was because we only had BR translations. i wonder when/if something will happen with the spanish translations? (the original, and i assume current ES translation should actually be ES_MX) -- WillNorris - 19 Nov 2008 - 22:16 Hey Will, in fact it should be ES_CR

I just seperated it, but at the same time, I started to doubt if it makes sense. Obviously, there are (important?) regional differences that affect the translation of a string. On the other hand, we will start sharing resources. If there were four translators for Spanish, suddenly there might be only one or two for a Spanish subgroup. So? -- SebastianKlus - 22 Nov 2008 - 18:36 Is there a particular place to discuss general translation problems? I'm working on the Swedish translation and would like some advice on how to translate the tagline, since I'd like to get that right from the start. The tagline "Free and Open Source Wiki" sounds great in English, but it might not translate easily into other languages. To point me in the right direction, could someone tell me if the word "free" is supposed to refer to the wiki or to the source. In other words, which of the following do you consider to have the same meaning as the tagline: I know it's a subtle difference, but hopefully someone knows what we want to communicate to potential users. -- ErikAman - 27 Dec 2008 - 13:53 Kan man inte säger: "Foswiki - det frit och öppet source wiki"? I think every language will have some speciality in it. Yesterday we talked about if Foswiki is male or female

I like your suggestion to have a special page where we define a bit more the character of Foswiki and build up a common sense. This also could give orientation for new translations and translators. -- AndreUlrich - 27 Dec 2008 - 19:27 Great, I see that you know some Swedish. Your suggestion isn't entirely gramatically correct, however. The phrase "free and open source" translates to "fri och öppen källkod", but it's impossible to cram the word "wiki" into the phrase in Swedish. I'm not a grammar expert, but it probably has to do with the fact that "open source" is used as an adjective in English without actually being an adjective. For now I'll settle for the translation "den fria wikin baserad på öppen källkod" which conveys both that the wiki (i.e. the software) is free and that its source is open. -- ErikAman - 27 Dec 2008 - 20:36

Do we use formal or informal language? Is there already some agreement about that in the community? I propose keeping the formal languages as minimum standard for the releases of foswiki, but to use informal language in the international webs on foswiki.org. -- IngoBlickling - 09 Jan 2009

Have you ever thought about putting Foswiki to BetaWiki for translation? -- FlorianStraub - 26 Jan 2009

About the translation system I have found some issues I would like to discuss I have used fully translated templates in two Spanish language Intranets with good results for two years so I think both translation approaches should be provided in the site to be downloaded with every version. I would also be glad to collaborate in this effort. -- EnriqueCadalso - 17 Feb 2009 This sounds like a good idea. The fully translated templates could be organized in subfolders, one folder per langauge. The interface translation is just one aspect of I8N. What about the content? Do you have ideas for the proper organization/structure of a Wiki site with content in multiple languages? How would we do this using Foswiki? -- FranzJosefGigler - 17 Feb 2009 No, I have no too much experience working with multi language environments. Besides I have not seen too much effort put on the translation of the content. In current .po files the translated context is minimal. In the sites I have used in Spanish I have found almost mandatory to translate the welcome page, the tutorials and the help pages. I had to translate also all the topics of the _default web. I think the rest of the default content is mostly administrative, so the ability to read it could be included in the AdminSkillsAssumptions. -- EnriqueCadalso - 19 Feb 2009 Question from the association board - is the work of this task team now complete? The target completion date has been passed. If not, you may want to revisit your goals. BTW I changed your status to "running" as you have been de facto for a long time now. Andre, can we have a status update please? -- CrawfordCurrie - 09 Dec 2009 Hi, I am new user, we will start using FosWiki at our organisation. I started to Turkish translations. I am planning to finish translation of mostly used parts at the end of april. I registered at translate.foswiki.org with username yamant. How can i add Turkish Language to translate.foswiki.org ? -- TolgaYaman - 06 Apr 2010 that's great news! thanks! i've created Tasks.Item8854 to work on this and started the process. -- WillNorris - 07 Apr 2010 Hey out there. Just wanted to see if there are some news here. Things seem a little stuck what translations is concerned

Maybe someone can shed some light in here: Are we still working with the *.po files. Or only with the pottle server? From the programmers' side, are the *.po files enough or is also translation of core documentation intended / required? If it is, how will this implementation take place? In seperate webs for each language. Or some big MAKETEXT chunks? Thanks in advance! -- SebastianKlus - 11 May 2010 We are working with *.po files and this will also be the case for strings inside code for the future. On top users can translate via our Translation-Server: http://translate.foswiki.org A translation of all documentation is not planned yet. The original documentation has to be streamlined in advanced, before it will be translated into 20 languages. IMHO 3 documents which cover the most central aspects would be enough for the start. -- AndreUlrich - 14 Sep 2010 The information around translating Foswiki is heavily outdated. For instance, TranslationUserInterface doesn't even mention translate.foswiki.org. Could you as a team create a better entry point for new translators? -- ArthurClemens - 14 Oct 2012 This team is in need of a new team lead as Andre hasn't been seen on the project for a long time. Andre, are you still available? Or anybody else on the list: please step forward to take the lead. Thanks. -- MichaelDaum - 22 May 2013 This team has been closed as per decision of the general assembly. Activities normally located in this task team will be folded into: If you are an active contributor to this task team, please join one of these two projects as a participant. -- MichaelDaum - 17 May 2014

May I suggest another language to be added? I know not many people do really use that language, but since I'm working on a Wiki about the klingon language, people hav asked me to set the interface to use klingon.
How many strings are there to be translated? It's very probable that I will be the only person working on such a translation, but I assume that the basic buttons will be translated quite quickly. Besides, it may catch a good attention to foswiki having a klingon interface